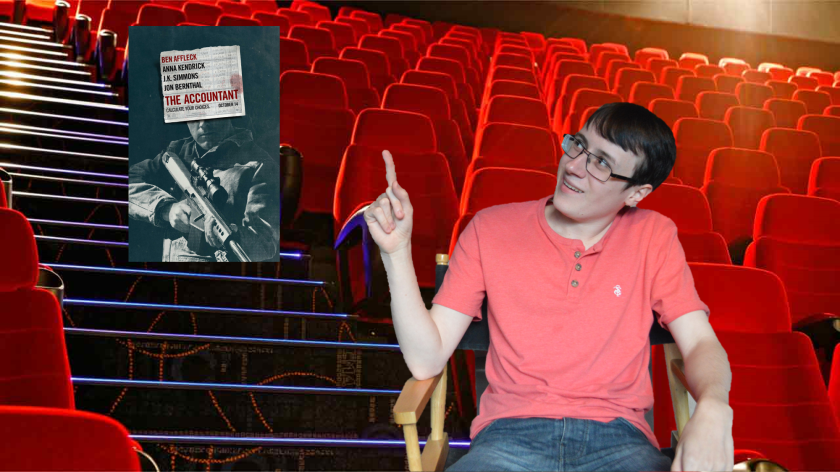 Before I analyse Gavin O’Connor’s new drama/thriller I would first like to bring attention to something called “The Completion Principle”. This is a psychological need that we all have in which we seek to leave no tasks left uncompleted otherwise we feel that our world is wrong. This is also a good research topic for those interested in film as it can explain a lot about why we sometimes leave the cinema disappointed or pleased by a film. Normally we leave film feeling pleased because there are no more questions to ask, the director has done all he/she can into wrapping up the narrative and leaving their characters complete.

The Accountant follows this path of completion through the character of Christian Wolff (played by Ben Affleck) and this desire completion is taken a step further by having Ben Affleck character have autism. While we can hide our feelings of incompleteness, people with autism find this difficult and it is shown through flashbacks of Christian’s childhood as he starts to panic over a missing jigsaw puzzle. His role as an accountant for dangerous criminal organisations serves as a catharsis for him because his character can discover and solve problems (he can complete the puzzle). Ben Affleck’s performance during these problem-solving sequences outshines any other period of this film.

What I find fascinating about the screenplay is showing Christian’s world in and out of control, there is one moment where Christian isn’t allowed to complete a task and it shows his strict routine going wrong because of this. It is a great contrast to when everything was at calm with the character of Christian. The additional characters were also very well written, each one with a motivation that sparks the fire inside to get the job done. Raymond King (played by J.K. Simmons) is close to retirement and wants to finish perusing Christian, Marybeth Medina (played by Cynthia Addai-Robinson) faces prison time if she doesn’t help Raymond finish his case. It’s a simple motivation, but sometimes in film simplicity works with The Accountant being a good example of this. Anna Kendrick’s character Dana Cummings serves as an invitation to the potential of a small romance between herself and Christian in which we get to see the social awkwardness side of Christian.

However, there is one element in this film that outshines the performances and the screenplay. The cinematography is excellent; this is a very well put together film through its framing. Seamus McGarvey is a brilliant cinematographer, in the early stages of the film he uses the frame to establish that this story’s focus is all on Christian Wolff and reveals how he is viewed by the people around him. There is one scene with Christian and Lamar Blackburn (played by John Lithgow), the CEO of Living Robotics who Christian must examine the accounts of. For a split second the two men are under a poster depicting a real hand and a robotic one shaking hands. From this one frame, we can establish what Gavin O’Connor wants us to think of these characters. Enclosing Christian in confined spaces adds another layer to this character as well.

If you happen to buy a ticket for The Accountant if this is a fast-paced thriller, you’ll be disappointed. The story, while clever, does have a very slow build up to becoming clever. The film takes its time to flesh out its characters. It is evident by the feeling that this film is way longer than it’s intended running time. I can easily see people who are bored by slow paced films think that the film drags on because this film demands your full attention, if you aren’t feeling 100% when you see this film, you won’t find the experience very entertaining, even during the films action sequences which are surprisingly well choreographed and should be moments where you say “wow”.

Because of the slow pace that makes this very different from any other action thriller, the film does kind of suffer with an identity crisis. There are moments where is becomes a drama, then thriller, then romantic comedy, then action etc. it’s hard to pinpoint what this film wants to be in terms of its defining genre. It only by a piece of string that the film can claim to be a thriller.

I did however notice something that became very apparent during the conclusion to this film. At the end, it has a great message aimed at people who have autism or people who care for others with autism. Having an autistic brother, it was quite heartwarming because it basically shares the knowledge that people with autism can achieve great things way beyond their personal boundaries and all the effort that is put in to look after autistic people is so worth it in the end. I hope I’m right in guessing that this was the message that Gavin O’Connor was trying to relay to the audience.

The Accountant is certainly one of the cleverer films of this year, but it takes it time reaching the cleverness when it should have come a lot sooner in the film. Yet, much like the care for people with autism, it is worth it in the end and will certainly bring a smile to your face.

Have you seen The Accountant? What did you think? Please let me know your thoughts and opinions in the comments below.