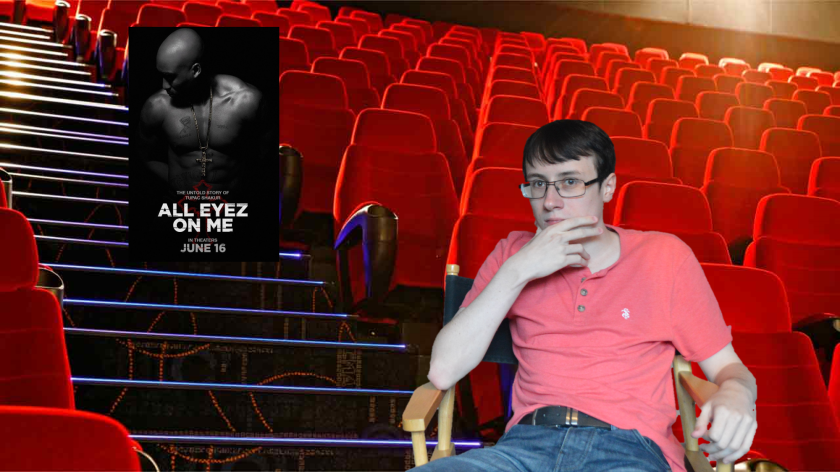 Tupac Shakur was someone who I never listened to but had heard of who he was and his popularity as an artist after his death, therefore I had no idea of the detailing of the events of his career. I’d say I was the ideal target audience for All Eyez on Me as well as the many fans of Tupac Shakur obviously. Whilst the film itself does paint the picture of the notorious rapper’s life and career, it very much so a do it by the numbers approach style of telling us the information we need to know.

The facts presented to us during Tupac’s defining moments make the audience feel like they already know this and that the film never leads us to what could be further told about these events or creating a deeper character sympathy from the audience through character relationships. It’s like the only source the writers looked at when coming up for the script of All Eyez on Me is the Wikipedia page of Tupac. But credit where credits due, these events in Tupac’s life are given the same level of importance that they’re meant to feel. Cinematographer Peter Menzies Jr. does this by having Tupac’s character center frame and in a position where he overshadows the other character within the scene. Normally I’d say this is poor cinematography but this type of framing enlarges Tupac’s need for being in the spotlight as a motivator.

Of all the moments of Tupac’s life depicted in All Eyez on Me, it’s during his time at Death Row Records where the film starts to shine with energetic and intimidating performances, during one scene where Tupac (Demetrius Shipp Jr.) is at a fancy meal with other artists and founder Suge Knight (Dominic L. Santana), it’s feels oddly familiar to the overall atmosphere of The Godfather films. You can feel Suge’s power as Dominic l. Santana delivers his dialogue which make for an uncomfortable shift in tone for the audience which adds to the shock value of the scene’s climax.

For a debut performance Demetrius Shipp Jr. picked one heck of an important role, but he manages to pull off a performance not too eye-catching but decent nonetheless. His performance also highlights the character arc of Tupac. At the beginning his character was all about taking after his father and becoming a revolutionary, and by the end he emerges from his cocoon as become a more outwardly spoken person and as the film puts it, Tupac is given the tools to his own destruction.

Tupac’s death would obviously be high up on director Benny Boom’s list of scenes not to mess up and overall it still feels slightly unsatisfying to the film. Despite the good performance from Demetrius Shipp Jr. and the rest of the characters, the film builds the scene up as if the characters know what’s going to happen, the usage of CCTV footage and telling us the time, date and place doesn’t do the scene any favors as it eliminates any opportunity to spring his death onto the audience. I feel that Benny Boom could have used the element of surprise to make Tupac’s death more tragic, something to catch the audience off guard.

It seems that All Eyez on Me has the main goal of glorifying the figure of Tupac and one of the device to do said goal is to refer to some Shakespeare to bring to light Tupac’s skills as a poet. That’s all well and good, but using the world greatest poet and writer as a comparison is a little too over the top for my reckoning, I have no doubt that he was an influential man but using Shakespeare to say that Tupac was on his level is too much.

Quite recently an article on the BBC News mentioned that the stars of All Eyez on Me stopped listening to critics, one of the reasons was because of the fans saying the events of the film were historically inaccurate. While I certainly noticed some inaccuracies, I also acknowledge Benny Boom’s efforts into telling an accurate portrayal of Tupac. biopic’s will be riddled with inaccuracies for a more enticing cinematic experience and audience should enjoy the film for the story, not the exactness of it.

All Eyez on Me has problems, I’m not denying that, however as a member of an audience, I came it knowing next to nothing about Tupac and left with my knowledge refreshed. The story presented to us could have been more enticing, the main problem with the story is that the film seems to layer the bricks, but forgot to put the concrete holding it together. However, I noticed that if you scrap the biopic tag and see this as a tribute film, then I’m confident that your enjoyment will be greater. Would Tupac be satisfied with this film who knows, but for the people who knew him, probably.

Have you seen All Eyez on Me? What did you think? Please let me know your thoughts and opinions in the comments below.