In the history of cinema, there has never been a more unlikely success story than the productive success of Nigerian cinema (or Nollywood). Currently, Nigeria has the second-largest film industry by number film productions, placing it above the US and having more productions annually than the UK and Japan put together. So how is it that Nigerian Cinema has become the most valuable, popular and profitable film industry in Africa? Our first port of call is the British.

Before the 1960’s came around Nigeria was a colony of Britain and cinema was introduced to the country with political motivations. The Colonial Film Unit held the most control of film production in Africa showcasing instructional short film promoting British initiatives. There weren’t many cinema houses back then and films would be shown by the means of mobile cinema van playing to over 3.5 million people. But once the Nigerian Film Unit was established in 1949, their plans to decentralize colonial film production worked as the unit was becoming slowly but surely Africanized, meaning more Nigerian natives were making films whilst following a similar structure to the Colonial Film Unit. This was another indication to Britain losing their grip on the country and on the 1st October 1960, Nigeria officially became independent from the British.

Almost immediately, cinema skyrocketed as a common part of social life all over Western Nigeria and the emerging capital Lagos. Cinema houses were being built all over the place and many Nigerian filmmakers, some independent, some emerging from the Nigerian Film Unit were taking matters into their own hands producing a vast number of local contents. Despite their efforts, Nigerian filmmaking could not compete with the number of international films that were flooding into the country. Hollywood films were the more popular amongst the likes of Indian, Chinese and Japanese films that were also being shown. There was simply no comparison when it came to the quality of filmmaking, Nigerian films were expensive to produce due to the technology of filmmaking being completely new (shooting on celluloid film had only just started to be used) and Hollywood films were cheap to distribute. Nigerians knew more about American actors than their own socio-cultural history.

Something had to be done to even get the chance to contend with the influence of Hollywood in Nigerian cinema, luckily cinema had caught the eye of another entertainment medium that had been booming way before Nigeria’s independence, theatre. Nigerian stage actors realized that just like theatre, film could be used to promote native culture and art, cinema even attracted the likes of Hubert Ogunde, described as “the father of Yoruba theatre”. Although Hollywood was still very much dominant in the cinemas, the use of local theatrical talent saw a significant boost in film production in the late 1960’s with some of these films coming from Nigeria’s very film production company Latola Films, established in 1962. This year was coincidentally when the first feature-length Nigerian film was made since their independence in 1962’s Bound for Lagos.

The Nigerian government were really enthusiastic in making cinema a pivotal industry, they started to pour money in funding Nigerian-made productions throughout the 1960’s with Bound for Lagos being one such film. Their financial generosity opened the floodgates for many enthusiastic, new filmmakers to obtain funding from the government to make unique mish-mash genre films, with the majority being docu-dramas like 1963’s Culture in Transition. They may not have been as profitable as foreign films, but they were the first indications of what a Nigerian film industry could look like.

Even though Nigerian familiarity was clawing its way back into cinema audiences, the problem still remained that foreign culture was still a massive influence in the Nigerian people, not only this, the personnel running the majority of cinemas of Nigeria were foreign investors. One such man who opposed this was the then head of state Yakubu Gowon who in 1972 enacted a yet to be controversial Indigenization Decree which could have meant a cinematic reevaluation, or the death of a progressive film industry that had just begun to progress. This decree was aimed at replacing foreign investors in certain industries and replacing them with natives of Nigeria, but what did this mean for cinemas?

Every cinema with foreign ownership and/or investment would no longer be able to receive this assistance and would have to rely on Nigerian owners to keep them afloat. The decree was massively controversial to the Nigerian film industry, it became a worry that because Nigerian film was only just becoming mainstream, few Nigerians would have the business knowledge of running a cinema than foreign owners. However, the decree managed to give Nigerians a more active role in cinema and because control was handed over to natives, more and more Nigerian producers, screenwriters and playwrights to adapt theatre productions to motion pictures increasing the output of films.

The Indigenization Decree was not the only major political event to happen to the country that had a profound effect on cinema culture. Ever since it’s discovery in 1958, oil was the dominant natural resource with a portion of its economy riding on it. At the beginning of 1973 all the way to 1978, Nigeria experienced an oil boom meaning plenty of income and as a result, more and more cinema complexes were being built left, right and centre. The biggest clue to how much cinema was changed by this came in 1976 with the construction of the National Arts Theater in Lagos. It incorporated two cinemas, each one being able to seat 700 people. Surely this meant that cinema was becoming an essential social role in Nigerian culture, what made this blossom more is because of a strong economy people ha enough disposable income to spend on a cinema ticket.

The echo created by a booming industry was enough to attract foreign producers to work in Nigeria alongside the native Nigerian filmmakers. One such director was Ola Balogun, his films aimed to unify the country with pride and change the perception of Nigeria to outsiders. Three films in the space of three years set out to do this. The first released in 1975 was Amadi, considered to be one of the first Nigerian historical films shot on celluloid, the film told the story of a pre-Civil War Nigerian when it citizens were united more than ever. The second was Ajani Ogun (1976) which due to its national popularity, became the first what you could call “commercial” Nigerian film. Finally came Bisi-Daughter of the River (1977) telling a story that reflected on Nigerian culture.

Many claim the 70’s was a Golden Age in Nigerian cinema and judging by how film had made it’s way seamlessly into common social life. I think however the term golden age doesn’t accurately describe the prosperity of Nigerian arts and entertainment during said period. Not only was cinema thriving, theatrical works had become more prestigious, and television, which had begun in the decade before, was also thriving with the Nigerian people not only having enough disposable income to go to the cinema, but also to spend on a home TV set. Once the 1980’s came around, television would play a crucial role in film and filmmaking. There was already one boom that affected Nigerian cinema, and a second one was just beginning.

By the turn of the 1980’s, the Nigerian film industry became of massive importance to the country. It currently stood as the biggest employers of work providing up to a million jobs and economically, provided around 5% of Nigeria’s GDP. Television wasn’t far behind but instead of this sector eclipsing the film industry, Nigeria told a different story and embraced its benefits. Much like cinemas, television stations were popping up all over Nigeria, the first came around in 1959 when The Western Nigeria Television Service (WNTV) was established. Once this happened the other major regions of the country set up their own stations. Films were almost always shown at a cinema, but they almost always found themselves on VHS shortly after their showings. Because of this, businesses swiftly set up a small-scale video trade that would spread Nigerian films across Africa. This sent off a dominance signal and established Nigeria as the key player in African cinema.

Director Jimi Odumosu showed how profitable releasing films to VHS could be when he released his horror film Evil Encounters straight to television. The following day, copies of the film were swamping the markets and streets with dealers recording the broadcast of the film. Filmmakers sought to this new distribution method quickly, because celluloid film was expensive, filmmakers scrambled to tell their stories on videotape and seeking out television studios to air their films. Making films was already expensive and filmmakers could not wait until celluloid became affordable. This push on home video became known as a potential starting point to the Video Film Era. Although costly, film productions were still on the rise, however many of them avoided screening at cinemas at all. it seemed on the surface that releasing on home video was plain sailing, or was it?

The cruel irony of pushing Nigerian films to the rest of Africa could be seen as a similar practice to what Hollywood was doing before Nigerian Independence. Nigerian culture was starting to influence other cultures in Africa which caused an almost “Nigerialization of African culture”, as a result, governments all over Africa were preventing this cultural takeover. In Ghana, for example, there were reports of police raiding shops that sold Nigerian films. Nollywood was becoming the very thing it had originally opposed.

There was also the local problem of piracy. Because dealers had to record a film straight from television, the recordings were often of poor quality making them a primary product in black market trade. The amount of demand for these films meant that dealers would not have the time to seek out the permission and right to sell films in the first place but went ahead anyway. Everyone within the industry’s infrastructure was unhappy, filmmakers were having money practically stolen from them and the Nigerian Copyright Commission (NCC) were having to deal with an illegal video pandemic. Nigeria’s rich culture of film was breaking apart.

Instead of quality over quantity, the Nigerian film industry was doing the opposite and had been doing so for decades, it was only until the start of the Video Film Era that the cracks in the industry’s foundations were being revealed as it couldn’t take control of this exciting new way of film distribution. It was unclear at the time whether the film industry would collapse, major resurrection as needed.

I was determined to share the history of Nollywood with you, and if you have never seen a Nigerian film before, I highly recommend doing so. For the next installment of Filmin’ Round the World, we are taking a return flight to a country where I visited just a month ago. 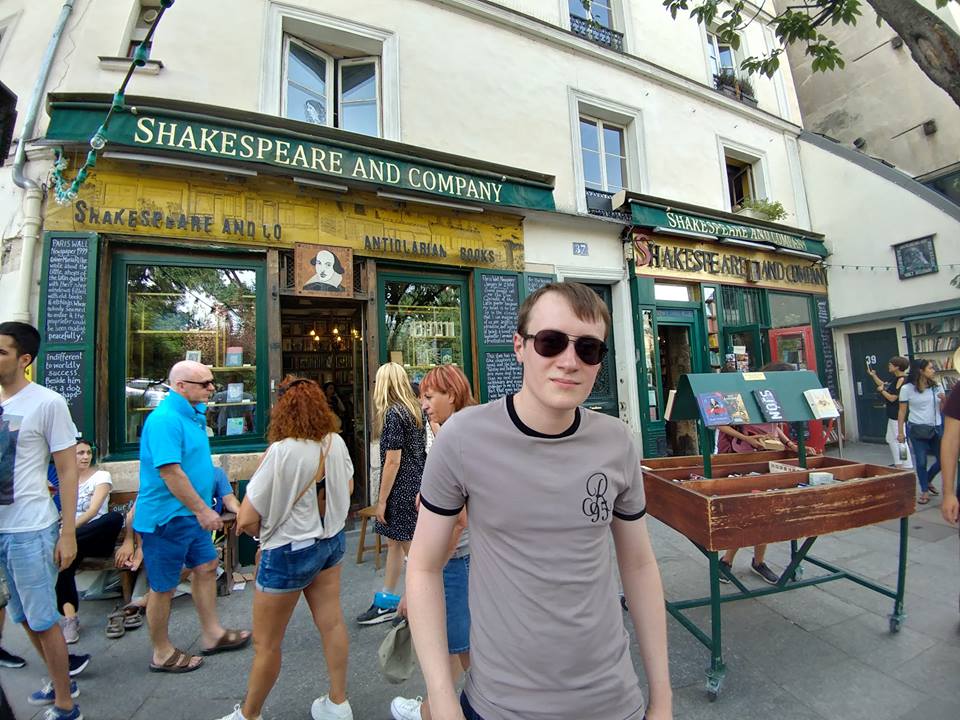 Filmin' Round the World