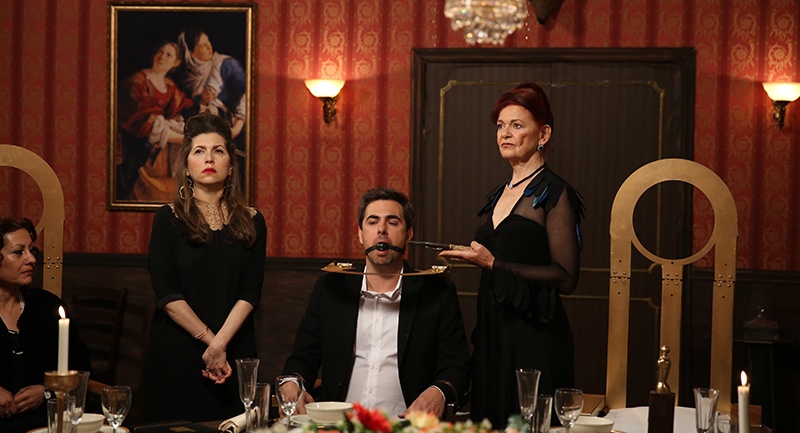 Madam Yankelova’s Fine Literature Club is an Israeli drama directed by Guilhad Emilio Schenker and this follows the story of Sophie, she is a member of a women’s only club that competes to lure attractive young men to the club to kill them. Sophie is one trophy away from becoming a member of the House of Lordesses but when her friend Hannah disappears, the club starts to frown on her, she must win her next trophy or takeover her friends’ role as a cleaning lady. Eventually, she meets Yosef who she invites to the club, but the two quickly start to fall in love which is against club rules.

Once again, this film was distributed by Rock Salt Releasing whose film Softness of Bodies I reviewed this year and I would like to thank them for reaching out to me again.

I’ve seen a lot of films made in various countries, but I had never seen a film from Israel before, so this was a completely new experience for me because I didn’t know what to expect from this film seeing as I know very little about the film culture of Israel. But I did find out that this is Guilhad Emilio Schenker’s feature film debut and all I can say is that this is a good, strong entrance into the feature film market because Madam Yankelova’s Fine Literature Club surprised me with how entertaining it can be, although it does take a while to surprise.

Let’s begin with Sophie played by Keren Mor, I really enjoyed her performance because her character is placed in a genuinely interesting dilemma that as it evolves takes more control over the direction of the narrative, through her performance in the more dramatic moments of the dilemma, you are convinced that you’re watching a character’s loyalties being tested as well as her own personal struggles with old age and appearance. Razia Israeli who plays the clubs headmistress Razia was also very good with a performance that seeks to demean Sophie at every turn, her presence is felt in every scene she’s in.

The film’s characters are relatively strong in general which is down to a script that prioritizes them. I was worried that the film was going for a style of substance approach, but it prioritizes getting to know its characters over the club itself. Although the danger of doing this has the knock-on effect of wanting to learn about the club and I was intrigued. The mysterious Madam Yankelova (Leah Koenig) remains a mystery and take a more indirect character presence. Nevertheless, the character arc of Sophie and Yosef (Yiftach Klein) are great, you feel attached to their romance because it causes confliction.

The film has an attractive, gothic vibe about it that looks inspired by early Tim Burton or current Guillermo Del Toro works which are made pretty clear from its set design. One minor touch that I felt was impressive is how many times a large picture of Madam Yankelova was featured in scenes like Big Brother was in 1984. It made the grip that the club had on Sophie even tighter making her struggle even more dramatic. Sometimes the gothic look can be a little too on the nose and, dare I say it, cliched, but it still makes for a more attractive looking film.

But here’s the rub with Madam Yankelova’s Fine Literature Club, it takes a while for all these great elements to start making any sort of sense. What I saw felt like two films with the later of the two halves being the more positive and cohesive. The first half had a slow start, so slow that most of what I praised the film with don’t work, only when they are provided with a faster, more heavily dramatic part of the story so these elements start to fit together and entertain.

Something that is supposed to entertain rather than distract is the sounds of Madam Yankelova’s Fine Literature Club. The soundtrack is decent, but I really think the film doesn’t know when to let silence do the talking. To say that the film relies on the soundtrack to accompany the tone would be an understatement as there is a score involved in most scenes, but hearing a constant, non-diegetic soundtrack removes all manner of things such as tension and passion, it reminds us that we’re watching a film when we should be absorbed into this world, accepting it as reality no matter the bizarreness. The sound effects suffer as well. Flickering lights and power surges sound very cheap, it probably wouldn’t take a long time before you found the same sound effects online.

With a limited budget, Guilhad Emilio Schenker will surprise everyone with such a solid feature film debut. Madam Yankelova’s Fine Literature Club was my introduction to Israeli filmmaking, and it has set a promising outlook. The major downside is that it is like watching two films. The first half is forgetful, but the second half is memorable. I can’t quite put my finger on the change where the pieces start to fit but what I can say is that the second half was a definite saving grace for this seemingly dark bedtime fairy tale.